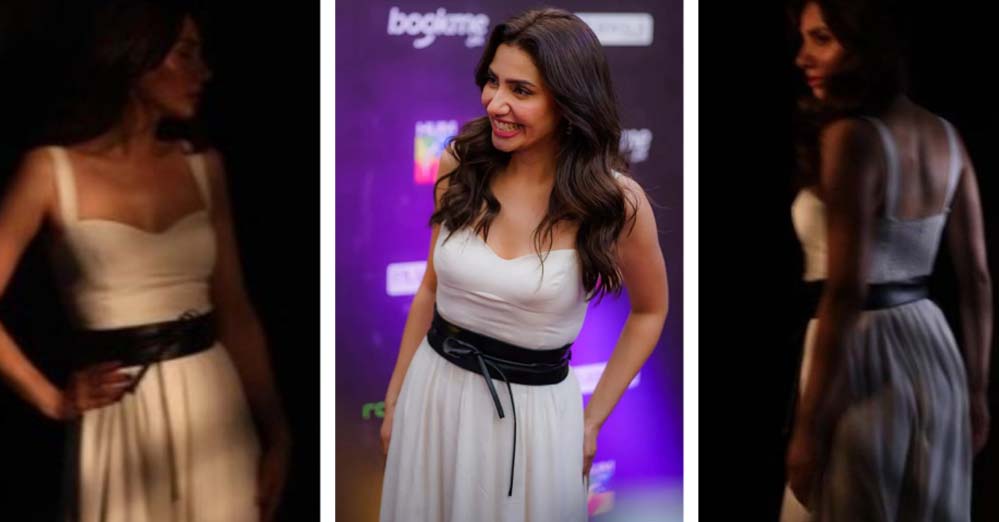 Beautiful actress and model Mahira Khan had her acting debut as a VJ in 2006 and is still working on new projects for big-screen television. In 2007, she wed Ali Askari; they divorced in 2015. The divorced couple had a son, who is now an adult and serving as his mother’s physical and moral support.

The public in Pakistan and India adore Mahira Khan for giving each assignment her best effort. Indian actors in particular, Shahrukh Khan and Aamir Khan, are Mahira’s obsessions. She will now co-star alongside Fahad Mustafa in her blockbuster film, “Quaid-e-Azam Zindabad.” She is pictured wearing a stunning white dress with vibrant embroidery for the marketing of her upcoming film. Babar Zaheer did her makeup, and Faiza Saqlain designed the clothing.

She was seen at the promotion wearing a white, straightforward western dress with a black belt, which looked stunning on the diva. Mahira is adept at wearing both western and eastern attire. Mahira is currently featured in yet another picture shoot, this time sporting a white net short shirt and shalwar. She wore exquisite jewellery and looked gorgeous. The actress and her attire are both made to look beautiful by the Bougainvillea flowers that are used for the entire photo shoot.

Mahira often visits her hair stylist since she cares a great deal about how she appears. She also takes care of her skin and tries to apply makeup sparingly, which helps her to look natural and uncomplicated. Whether she is wearing an eastern or western clothing, she always looks gorgeous.

How does Mahira Khan appear in a skimpy white dress? Please give your thoughts about this actress’ fashion taste. Thanks!