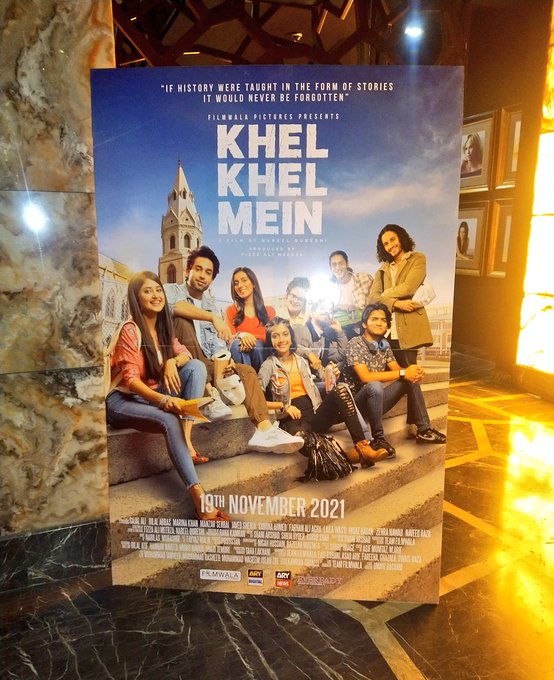 The film “Khel Khel Mein,” starring Sajal Aly and Bilal Abbas Khan. Was released a few days ago and has already grossed over Rs. 40 million. The storey of East Pakistan’s split is presented to future generations in this video. And, of course, Sajal and Bilal have put in a lot of effort and passion into this picture. As evidenced by their deeds.

#KhelKhelMein is a must watch movie. An excellent effort to highlight the realities of 1971 war.
👍🏼♥️🇵🇰
pic.twitter.com/mEXwsfKpAp

Before the film’s release, Sajal and Bilal Abbas Khan travelled all across the country to promote it. And this video was primarily promoted in Pakistan’s prestigious universities. Here’s something crucial to know: this film is directed by Nabeel Qureshi, and Fizza Ali Meerza is the film’s producer. Even before this, the director and producer team had already earned the hearts of the public with their films Load Wedding and many more.

When asked why they joined up for the film by a fan during an interview. Sajal Ali and Bilal Abbas Khan both responded that it was a childhood wish. That we worked on Nabeel Qureshi and Fiza Ali Meerza’s film. Our wish has now been granted, according to both of them. Sajal and Bilal have already won the hearts of their fans with their outstanding performances in the Hum TV drama programme O Rungreza.

1/4
Sat through the nth generation warfare's latest blockbuster (not), titled "khel khel mein".😬
Earlier this year the powers that be "impressed" upon LUMS to cancel their conference on 50 years of Bagladesh's independence. This is the khaki pic.twitter.com/fGMA3pLwJE

Don’t forget to let us know whether you’d want to see Sajal Aly and Bilal Abbas Khan in more TV dramas in the comments area below. If that’s the case, we’ll be waiting to read your insightful remarks. Thanks!