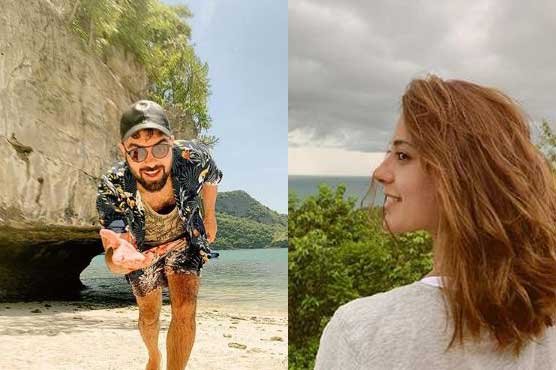 In Pakistan’s entertainment sector, Iqra Aziz and Yasir Hussain are the most successful and attractive pair. They are usually in the spotlight due to their dazzling appearance and their undying love for one another. This winning couple married in 2019 and are now the proud parents of Kabir Hussain. The cutest and most precious baby boy. Iqra and Yasir have both been quite busy since Kabir was born.

Now they’re on their way to Thailand for vacations. And their beautiful and majestic photos are gaining a lot of attention and love on social media. Yasir Hussain recently released enthralling photos of Iqra Aziz sporting a lovely parrot green hue tea shirt paired with adorable denim. Yasir went on to say that after a long period, they were able to reconnect with old friends and have a good time.

More of their films and photos are now being shared on social media. Iqra Aziz is really adorable, while Yasir Hussain’s elephant trip is hilarious. Yasir Hussain made his image even more hilarious by adding a wonderful witty commentary. He claimed that Iqra angered that innocent animal since she engaged in a lot of chatter with it. And now this poor creature is irritated. Iqra Aziz was seen petting the elephant and enjoying her trip in the video.

The first journey after Kabir’s birth is proving to be a lot of fun for these two lovebirds. With each click, we fall more in love with theirs. It’s a joy to see Iqra in such a happy mood. They’re both unquestionably pleasing to the eye.

Let us know how you came across this post and what your thoughts are on these clicks in the comments area below. Thanks!