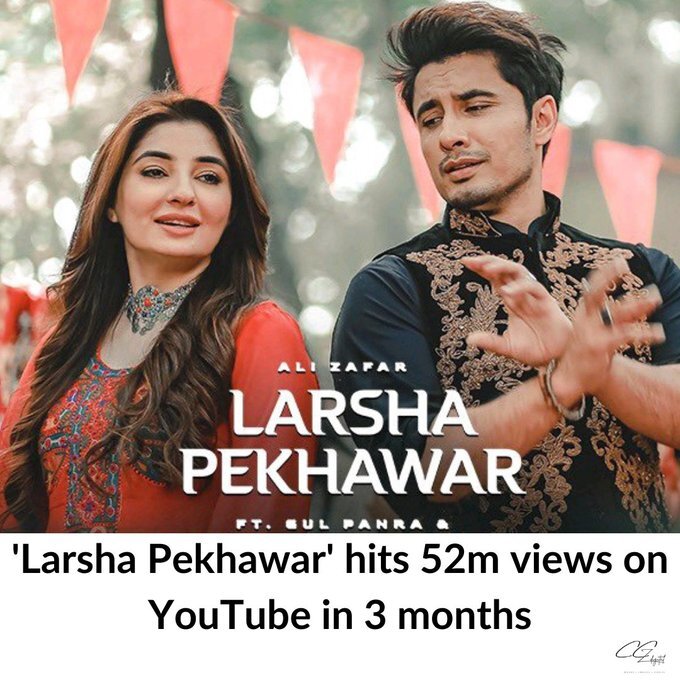 According to a press release, Ali Zafar and Gul Panra’s song Larsha Pekhawar has received more than 52 million organic views on YouTube to date. The vocalists produce a new rendition of the iconic Pashto song on September 22 as a tribute to Pashtun culture, but the song was well received by the general public throughout Pakistan. Within a few hours of its debut, Larsha Pekhawar had climbed to the top of YouTube’s video streaming platform. ‘Larsha Pekhawar’ Panra has surpassed 52 million views on YouTube.

Hassan Badshah composed the soundtrack, while Waleed Akram directed the video. In September and October 2021, the song was at the top of the YouTube video streaming website for around five weeks.

Overall, Zafar had a fantastic year musically in 2021.

The year began with Zafar’s Ve Mahiya, which featured Aima Baig. Zafar sang the OST for the drama Pehli Si Mohabbat a few weeks later. The OST has over 12 million views on YouTube and has become one of the season’s most popular drama OSTs.

Zafar later released his version of the legendary naat Balaghal Ula Be Kamalihi during Ramadhan. On YouTube alone, the video has nearly 33 million views.

Singing for a hero who goes unnoticed

The musician also offered a moving homage to Pakistani mountaineer Muhammad Ali Sadpara. Who went missing while climbing the K2 on February 9. Zafar combined several traditional instruments into his interpretation of Kamal Masood’s song Paharon Ki Qasam. Which was accompanied by a music video that includes snatches of Sadpara as well as breathtaking B-rolls of the magnificent mountains he hiked. Game Bun Gai and Hum Mazdoor, two more tracks, were also well receive by fans.