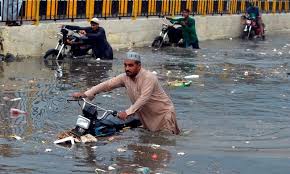 Urban Flooding in Karachi 2020. The monsoon season in Karachi normally starts from mid of July and ends near September firsts.

The first spell of rain in Karachi was hilarious. It’s before Muslim Festival Eid-ul-Azha while Muslims bought their animal for holy Sacrifice and they face so many problems regarding rain.

K-Electric poles also disturbed the residents of Karachi taking away the lives of innocent ones. The first spell wasn’t enough to ruin the city as the second spell hits Karachi in mid of august.

The highest amount of rain ever in the history of Karachi in a single day. This observation has recorded last 26th July 1967 and its about 211.3mm in 24-hours near Masroor Base.

At least 90 people have lost their lives across Pakistan

Three days includes 25th, 26th, and 27th of August have damaged more than 1000 houses whereas the spell also damaged the port city of Karachi. The areas near the hub dam have flooded with water as well.

Many videos and photos have been shared on media by the residents of Karachi which showed submerged vehicles in different areas.

Only on Thursday, 19 people lost their lives in rain related incidents happened in Karachi.

Electric shock, drowning, collapsing of buildings were common reasons for people losing their lives in Karachi.

After this spell and taking the situation into account. CM of Sindh Mr. Murad Ali Shah has announced a holiday on the 28th of August 2020, Friday. He said that all government, semi-government and private institutions will remain closed only in Karachi with an exception of essential services institutions.

The Pakistan Navy did a rescued operations, recovered bodies from different areas which include Landhi, Korangi, and Shah Faisal Town.

An emergency in Karachi has deployed teams for the aid of residents in different areas equipped with living saving boats, consumables, and equipment.

55 peoples who were trapped in the above-mentioned places were rescued by the teams and more than 20 stranded families have been shifted to the safest places.

Army is playing a prominent role in rescuing operations

NDMA has been taking place in Karachi for helping flood victims with the addition of medical camps been established at various places.

Dewatering of more than 30 sites in Karachi had been completed while cooked food had been distributed among 10,000 people in the flooded areas.