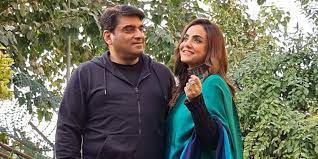 Nadia Khan, the queen of morning shows, needs no introduction. She has won the hearts of the public for the past 25 years. By delivering morning shows in fresh ways on television screens. She is frequently seen in acting roles in television dramas, in addition to presenting. In her spare time, on the other hand, she keeps in touch with her audience by uploading daily videos to her YouTube channel.
Nadia Khan, a 42-year-old Pakistani actor and model, has been divorced three times. From her first marriage, Nadia has a daughter and a boy. However, the good news is that she recently adopted a third son. Making her a mother of three children. According to insiders, she has relocated from Dubai to Pakistan and intends to stay there indefinitely.

Nadia Khan’s third marriage to retired pilot Faisal Mumtaz Rao was ridiculed on social media a few months ago. People said that the actress had wrecked someone’s home. And that her third spouse is the father of a 22-year-old boy. On the other hand, some people believe that these actresses are simply attempting to marry wealthy men for financial gain. The good news is that Nadia Khan and her husband have moved to a separate residence in Karachi’s Malir Cantonment district.

However, we shall see in today’s article that prominent Pakistani morning show host Nadia Khan. Has stated that she was previously offered heroine in the Pakistani film Bol. Unfortunately, her first husband would not allow her to act in the film, so she declined the invitation.

Do you want to see Nadia Khan on television again as an actress? If you answered yes, you will undoubtedly express your thoughts in the comments box below. Thanks!