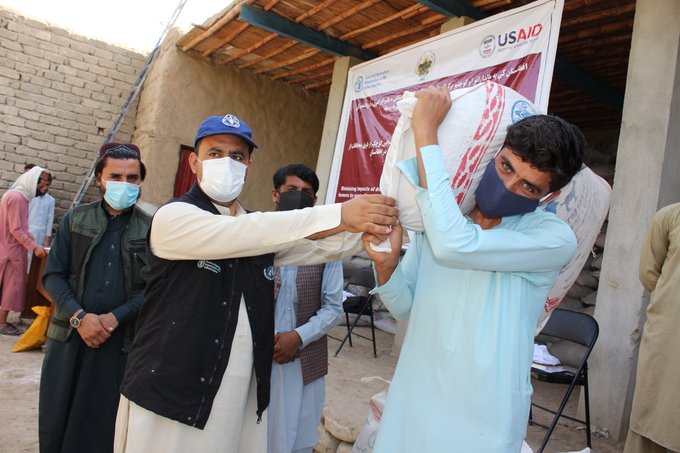 Rizq, a Lahore-based business, has organised food boxes for Afghan families in desperate need of assistance. In collaboration with a consortium of NGOs and commercial organisations.

Musa Aamir, the 27-year-old co-founder of Rizq, told Anadolu Agency that: “Bags of rations are being sent to Afghanistan. That will be helping almost 2,000 Afghan families with essential household items and dry food.”

On World Food Day, which is celebrated on October 16, he emphasised the significance of food, saying: “We want to highlight this horrible ratio of food wastage which is happening in our third world countries. Almost 36 million tonnes are wasted every year in Pakistan. And that is about 40% of the food.”

“And in a country like Pakistan which is food insecure and fighting malnourishment, this is nothing less than a crime,” Amir said.

Pakistan is ranked 88th out of 107 countries in the 2020 Global Hunger Index. It has a serious level of hunger with a score of 24.6. “We started this as our university project in which we were collecting leftover food from weddings and restaurants and after repacking it, we distributed that amongst the needy people. Later on, we continued and today we have expanded to 23 cities in Pakistan. And also helping our neighbouring countries,” said Aamir.

“This is not just about food distribution. We have created platforms where donors, NGOs. And the people who need our help can come together. Every month, we release a report of food wastage to highlight the importance of food. And to tell people how they can help others who are sleeping hungry at night,” he explained, describing how the group grew.

Learn about the economic, security, environmental, political, and climate-related challenges #Afganistan faces that may impact its #FoodSecurity, from Jamie Lutz and @JakeKurtzer: https://t.co/PvhNyl9pgk

“As of today, we have prepared more than 9.2 million meals and saved 800,000 kilogrammes (1.7 million pounds) of food with the help of almost 4,000 donors, 70 partner companies, and 30 NGO partners. Our next goal is to help our brothers and sisters in conflict zones, including Yemen and Syria,” said Aamir.

According to the US National Intelligence Council’s Global Food Security assessment from 2018, “Declining food security will almost certainly contribute to social disruptions and political instability.”

Salman Sufi is the founder of a foundation dedicated to women’s empowerment. “Keeping in mind the issue of food shortage, we have started a new venture called The Pasticceria which is an all-women-led initiative, and we do not waste any food. The food is only prepared on pre-orders and also in front of customers so they get to know what ingredients are being used and no extra orders or pre-cooked food would be left as it creates food wastage.”

The Punjab Food Authority initially published its policy in 2018, detailing all of the food rules and regulations.

4 million school girls are deprived of school under the Taliban’s regime in Afghanistan. 2 million children are malnourished.
With drought, pandemic, and conflict, the food security situation will continue to worsen; and hunger will rise. #InternationalDayOfGirlChild 😔 pic.twitter.com/By8ZtEsNVj

Chairman of the authority, Umer Tanveer Butt, said: “Most of the food wastage happens at weddings and restaurants which offer buffet and high teas with so many dishes. We have regulated them to take pre-reservations so they can cook the food according to the need of their customers.”

The authority is also working to develop a skilled force of food safety officers by providing them with training both locally and internationally.

“Our main goal is to prevent food wastage. We are also training our officers in the hygiene of food being served to people. We can eradicate hunger all around the globe if people start initiatives like Rizq to share meals,” said Butt.