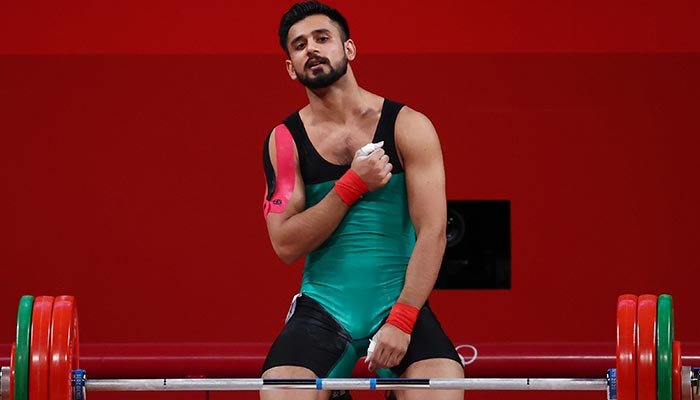 Pakistan came close to its maiden weightlifting medal at the Tokyo Olympics on Sunday. He fell just a little short as Talha Talib finished 5th in the competition.

Talha, competing in the 67kg men’s weightlifting contest, was on top of the race for a while before being surpassed by athletes from China, Colombia, and Italy in final attempts.

The 21-year-old weightlifter — first from Pakistan in 44 years — entered the competition without a coach, yet he showed his mettle.

Talha fell at 166kg in the first turn at the clean and jerk move, after a snatch lift of 150kg. He lifted 170kg in his final attempt to have an overall lift of 320kg.

Talha was pushed down to second place from leading rank. After Korea’s Han Mayekon lifted 174kg in the clean and jerk. Italian weightlifter Zalmi Mirko lifted 177kg. All the way, Columbia’s Luis Javier lifted 180kg in the clean jerk move to push Talha further down

However, the gold medal went to China’s Chen Lijun who lifted 187kg in the clean and jerk move — a new Olympic record — to have an overall lift of 332kg in the completion.

Talha, a gold medalist in the Commonwealth Games, finished 5th in the competition. Although he couldn’t win a medal, he received praise from all over the country for his superb performance.

In an interview ahead of the Olympics,Talha had highlighted how the Pakistan Sports Board (PSB) had not organized any training camp for weightlifters in the last three years.

Talha himself had to train at a makeshift gym in the courtyard of a school in Gujranwala in the absence of an adequate facility arranged by the PSB.