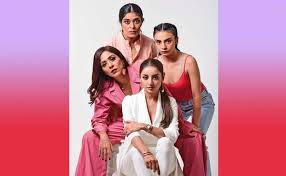 First ever web series of Pakistan which is released recently have become a target point of some Pakistanis. This series revolves around 4 girls, a lawyer-turned-housewife, an ex-convict released from prison, a high-society wedding planner, and a lower-middle class youngster who’s desperate for a career as a professional boxer.

The story goes on interestingly, it also has a good 8.5/10 rating on IMDB. Well, in Pakistan a very dialogue spoken by Hina Khwaja Bayat in this drama is on fire now. Her dialogue was like.

“To a man who is about 20 years older than me, I gave him 2 Hand Jobs per day.” She further said: “I gave all sorts of JOBS to get promoted”.

We all clearly understand what that means.

So on the usage of this word “Hand-Job” some of our citizens have gotten so angry that they want PEMRA to ban this web series. On twitter it is one of the trending’s right now.

But here’s an interesting thing. ‘Churrails’ is a property of steaming channel ZEE5. Speaking of which, it is a property of India. PEMRA cannot point its fingers on it, neither it can take any such actions.

According to these people this dialogue will spoil our children in a bad way and they will get the wrong vibes from it. They will learn bad from it. Now, I want to ask one question. What about those rape cases which are increasing day by day in our country? Oh I forgot. Those will give such strong and good vibes to the children and the girls around.

You can see the language these people use in their tweets. In their opinion, usage of slang is okay but using the word “Hand-Job” in a web series is not okay. Wow! Peak of Hypocrisy in our country.

One thought on “Pakistanis Demands PEMRA to ban Churrails:”

Inside the spectacular birthday celebration for Humayun Saeed, organised by Salman Iqbal and Sabeen Salman