Home » Sussex brings together Rizwan from Pakistan and Pujara from India 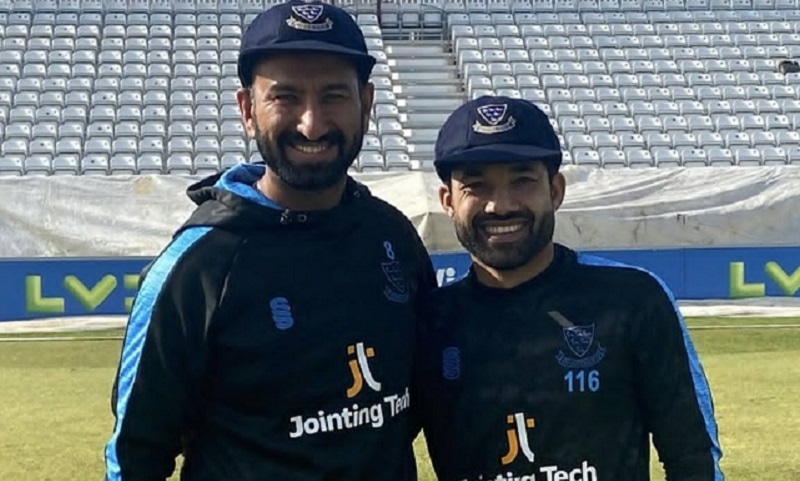 On Thursday, Mohammad Rizwan and Cheteshwar Pujara both played for Sussex in the English County Championship. A rare instance of Pakistani and Indian cricketers playing for the same squad. Sussex brings together Rizwan from Pakistan and Pujara from India.

After the 2008 Mumbai bombings, which officials blamed on Pakistani militants. India severed bilateral cricket ties with Pakistan, and the teams now only face each other in multi-nation events.

Since a brief thaw in relations in 2012-13, when Pakistan toured India for a series of One-day Internationals and Twenty20 matches, the South Asian rivals have not met each other in a bilateral series.

Pakistan’s stars also do not participate in the Indian Premier League. The world’s most prestigious Twenty20 tournament is presently being held in India.

However, Rizwan, a Pakistani wicketkeeper-batsman, and Pujara, an Indian batsman. Were both in the Sussex lineup for their four-day division two match against Derbyshire, which began on Thursday.

Last month, Sussex recruited Pujara to replace Travis Head, who asked to be freed from his contract due to greater international obligations.

Sussex head coach Ian Salisbury said: “I am extremely excited to be able to bring in players of Rizwan and Pujara’s quality into the side.

“Not only are they absolute world-class cricketers that will boost our performances on the pitch. To have them around the boys and in the dressing room can only be a positive.”