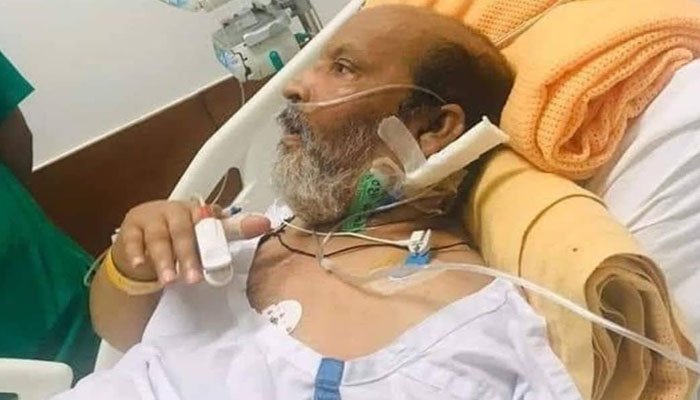 Umer Sharif stopover in Germany after health declined onboard US flight

Umer Sharif flew to US to get cure for his ailing health. His flight left Karachi Airport on 28th September 2021 . However, due to his medical emergency, the air ambulance transporting Umer Sharif made a landing in Germany the next day. Somehow, his health deteriorated while he was flying. Fans in Pakistan are much concerned.

Thank God, the German authorities approved of the emergency landing on humanitarian grounds. So the King of Comedy, and his wife were able to have visa of 15 days. Nevertheless, Germany is not the destination. So the trip will not last more than a day reportedly. Umer Sharif is supposed to receive a quick treatment for his fever before he flies to his scheduled destination in the US. Some reports are saying that he contracted pneumonia during travel and will rest till doctors in Nuremburg deem him fit to move on. The flight was very exhausting for him. Even though the doctors in Pakistan had declared him fit to travel to the US for advanced treatment, his ailing state demanded immediate attention in Germany.

As a result, wife Ghazal is very grateful to the German officials for understanding and empathy in their time of need. Meanwhile, Pakistani mission in Germany has assured every possible assistance. Consul General Zahid Hussain, himself visited Ghazal for condolences.

Mr. Umer Sharif was admitted in a hospital in Germany last night. On the instructions of the Ambassador @DrFaisal, Consul General Mr. Zahid Hussain visited the hospital, met his wife and assured every possible assistance @ForeignOfficePk @SMQureshiPTI @FMPublicDiploPK pic.twitter.com/J2XmUjfnqV

Thus, as he gets ready for further treatment in Washington, fans in Pakistan and abroad are praying for his complete recovery. Consequently, the federal and provincial governments are are assisting in the treatment of the brilliant artist. His physical fitness is quite questionable as he is receiving critical care since the days of his journey began.

Meanwhile, the Sindh government approved Rs40 million for the treatment of the ailing celebrity. This sponsorship for Shairf will be used to cover the expenses of the air ambulance and other related costs in US.