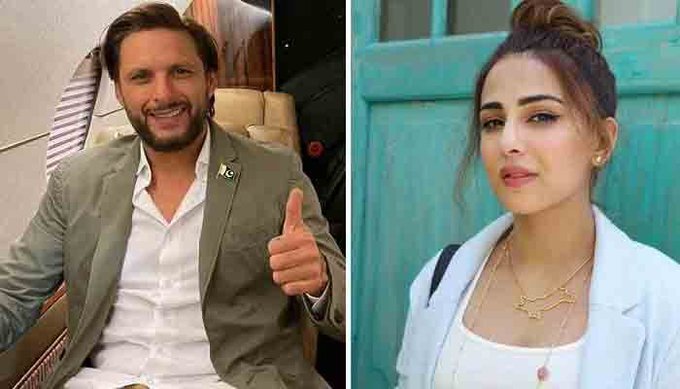 Ushna Shah’s heart has been conquered by the legendary Shahid Afridi called Lala. And she can’t stop admiring his nice and remarkable conduct. Actually, these two actresses met on a plane as Ushna Shah was on her way to Lahore to film her highly anticipated flick. Shahid Afridi had an interaction with the actress. And she has adored him ever since. We believe there is no one who isn’t a fan of Lala G. Just as most of us are. Ushna Shah, who is a heartthrob and has millions of fans, has also had a fan moment.

The actress commended his humility and elegancy on her Twitter account. She addressed her letter to Pakistan’s biggest star. Who is both humble and sincere. She went on to say that this tremendous star had bestowed upon her a plethora of duas and wishes. She was not only courteous to everyone who approached him. But she specifically emphasised children.

Dil Jeet Liya Lala was how she ended her post. Shahid Afridi is an unstoppable personality as well as a cricketer. His humanitarianism and charity endeavours are commendable. More gems like him, who are living examples of humanity and humility, are needed.

Anurag Kashyap and Ushna Shah recently discussed their big project. She is an incredibly brilliant actress who deserves to be recognised for her exceptional talent and acting abilities. People often mock her for her English accent. Which they believe is phoney, but she has repeatedly stated the circumstances that led to her adopting this accent. Overall, Ushna had the most memorable fan moment with Shahid Afridi.

Do you have something to add to this article? Let us know about your fan moment; it would be interesting to hear about it. Thanks!