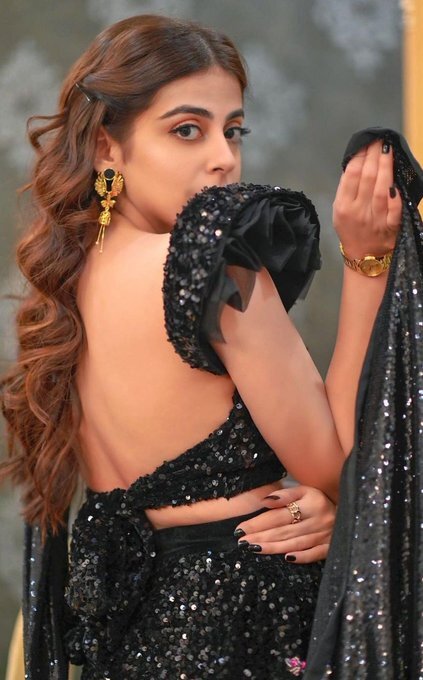 With her sizzling and enticing look from her recent shoot for Tayyab Moazam Studio. Bebak Actress is boosting the temperature in this cool wintery season. The enchanting and alluring diva’s jaw-dropping beauty is casting a spell on spectators. And we can’t take our gaze away from her. She has appeared in numerous modelling sessions. Which serve as important evidence of her acting and modelling accomplishments.

A black full flared fairy gown with a backless blouse. And glittering details transforms her into a dreamlike beauty reminiscent of a fictional character that is hard to locate in the real world. On the middle of the dress, a gorgeous enormous flower work with shimmery. And gold sequence is done. And here we notice an artistically made lovely lion’s face. Which is rather a common thing yet very beautiful.

She captioned one of her photos, “Promise me no guarantees.” After viewing Yashma Gill’s beautiful and magnificent beauty. We are simply awestruck. Her role as Wafa in the drama series Bebak has earned her a lot of attention and praise. She is working hard to position herself as the industry’s leading actress and most accomplished performer. It’s fair to say she’s made significant progress toward her aim.

Following the publication of these photos on Instagram, Yashma Gill has received flak. These keyboard warriors, as usual, are offended by her revealing clothes and despise her for wearing such a cut. Some of her admirers are sending her messages of love and gratitude for her stunning photographs.

Are you a supporter or a detractor? Please share your thoughts in the comments box below.