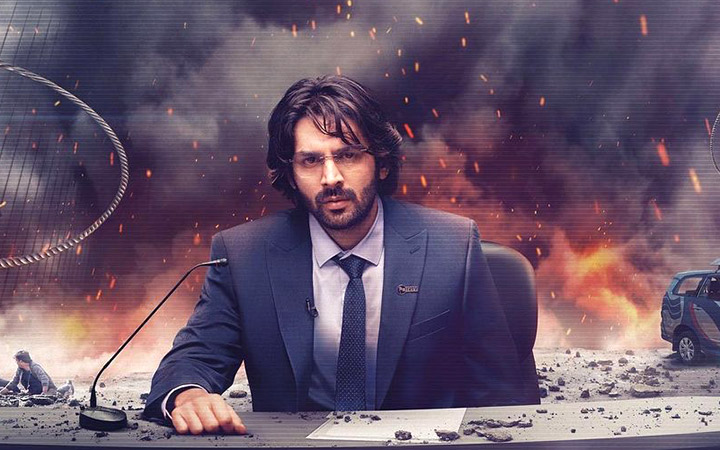 DHAMAKA is the story of a prime-time reporter getting the biggest scoop of his career. Arjun Pathak (Kartik Aaryan) was a reputed TV reporter of Bharosa 24×7. He is married to Saumya Mehra Pathak (Mrunal Thakur). All is going well but due to an unsavory incident, Arjun is demoted and is given the post of a radio jockey on Radio Bharosa.

His marriage with Saumya is about to end as their divorce proceedings are going on. One day, during his morning show, Arjun receives a call from a man called Raghubeer Mehta (Soham Majumdar). He claims that he has planted a bomb on the Sea Link in Mumbai. Arjun assumes that it’s a prank call and abruptly cuts it. The next moment, he hears a loud blast. He looks out of the window and sees that a part of the sea link has exploded. Raghubeer calls again and wants to talk. A scared Arjun immediately phones the cops. But he cuts the call when he realizes that this is his chance to get back his position as a prime-time news anchor. He requests Raghubeer to wait for some time.

He immediately dials his boss, Ankita (Amruta Subhash), and informs her about the situation. He also gets an assurance from her that he can go on air with this story. A temporary studio is set up in the radio station. Arjun goes on air and begins to further talk to Raghubeer. At this point, Raghubeer informs that he wants an apology from the minister Jaydev Patil immediately; or else he’ll do more blasts. He also tells Arjun that there’s a bomb in his earpiece and that he’ll execute the blast if he moves from his seat. To add to Arjun’s fears, he learns that Saumya is the one who has gone to the Sea Link to cover the story on the ground. Another blast rocks the Sea Link and now Saumya and the rest of the people present there are in danger. What happens next forms the rest of the film.

DHAMAKA is based on the Korean film TERROR LIVE [written and directed by Kim Byung Woo]. The story is unique and one of its kind. DHAMAKA is a thriller but it starts on a sweet note. Soon, the tone changes as Arjun gets the call from the mysterious caller. The first half will give you no reason to complain as the makers neatly explain the setting, the dynamics between the various characters and why Arjun has got demoted. The way Arjun uses his divorce papers to make notes is quite assuming and shows that the director has tried to make the product stand out. The scene where Jayant Patil’s deputy Subhash Mathur (Vishwajeet Pradhan) comes to the studio and speaks to Raghubeer is a terrific scene and will leave viewers astonished. Another heart-in-the-mouth scene is when Saumya attempts to save a girl from a car before it falls off the Sea Link. The second half, too, has its share of good scenes but due to the above-mentioned glitches, the impact is diluted.