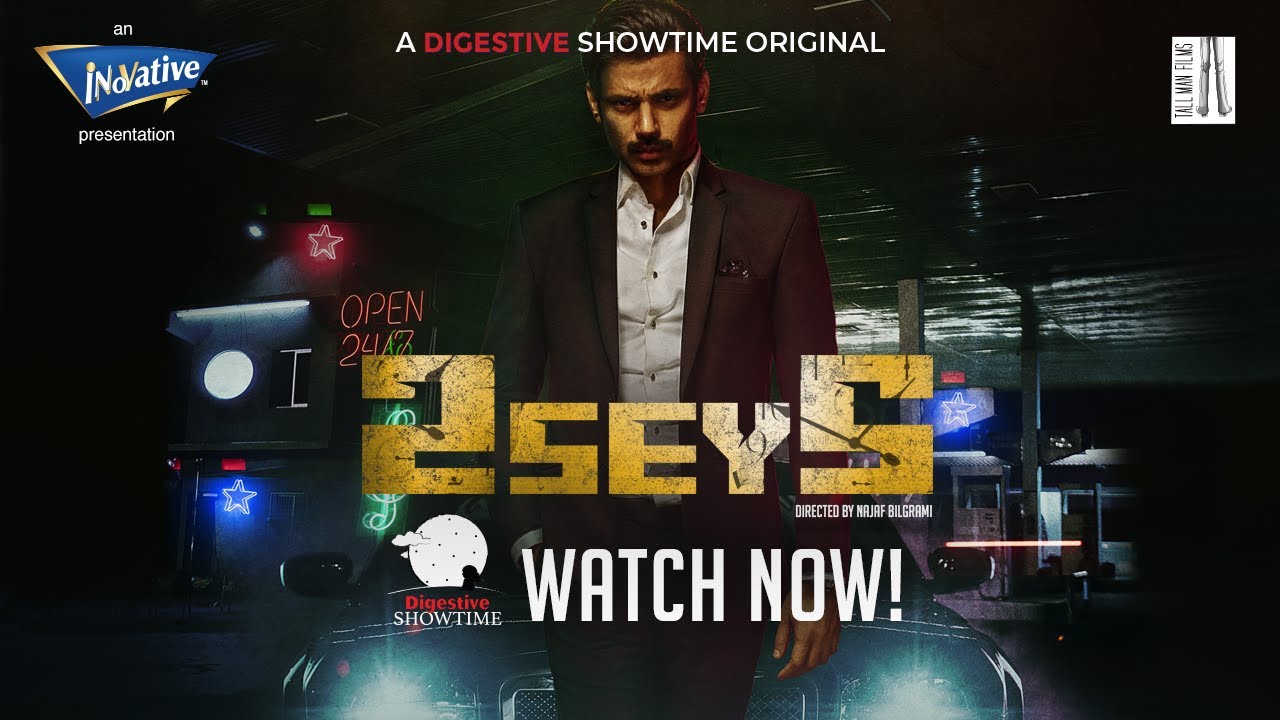 Digestive Showtime has recently released 2 Sey 5. A short film that speaks more than it talks. With Zahid Ahmed oozing charm as a rich, inconvenienced man Kabeer returning home from a party until his car breaks down. One initially wonders what the point is that the film is trying to make.

It would be wrong to not praise the way lighting has played its part in moving the narrative forward. The lighting keeps the magic alive. The contrasts with low source lights at the gas station, the car’s headlights, and the neon lights keep matters urgent. The cars are ready to leave with their lights always turned on throughout the film. The lighting itself is a character, and not just there for the aesthetics.

The film may not offer a moment of surprise with its ingeniously natural unwinding. But it offers numerous rhetorical questions and chances to take a look at oneself and reflect. At first glance, it may not feel like Digestive Showtime had a higher purpose to achieve with 2 Sey 5. But as it progresses it rattles you into self-awareness. The time that elapses within the film may just be 2 Sey 5. But it really is the protagonist’s entire life coming face to face with him.

Packed with entertainment and powerful messages, the Yorker steers clear of the traditional formulaic films that we’ve all grown up watching.

The film is so far being received well by the audience. For its unmatched production quality and impactful storytelling.

The short film will be followed by others including 2 sey 5. Full circle, Daughter by law and Road trip.

Using different languages in the narrative.

The use of Sindhi has been placed smartly. With Sindh comprising a number of Sufi Saints and their final resting abodes, it is not strange that the mysterious man who fixes Kabeer’s car is a Sindhi who believes in mysticism. In the film, Sindhi becomes a vessel of mysticism and spirituality. The most pleasantly surprising aspect of the story is that none of what the mysterious man says (after they share a joint) in a language Kabeer barely understands, gets lost in translation.

Zahid Ahmed compels you to feel Kabeer’s annoyance throughout the whole film. The character can be annoying at certain points with his sulking and panicking. But that is exactly what they are trying to achieve. Towards the end of the film Kabeer finally gains the composure he had been missing out on. Just like the voice in his car, his “software has been updated”.

The digital platform, Digestive Showtime, celebrates voices, elevates films that have the power to create change and bring audiences together to create meaningful connections. Assembling some of Pakistan’s most talented artists and storytellers around a central effort to provide entertainment, Digestive Showtime will offer audiences an opportunity to enjoy short films with production quality that of a feature film and this is the uniqueness of the platform.

Digestive Showtime Presenting-2 Sey 5 Short Film. If you are lost in life and looking for a way back, this is definitely for you.

At the same time, it provides a unique story that is relatable to the local audience. Our aim is to elevate the standard of film production to match with international OTT platforms, and give it to our local audience with original content made for Pakistan.”

Beautiful and mysterious story with a veiled message. Some points to reflects 2 to 5 is the medical time from Tahajud to fajr (Half third of the night). We are lost in our lives but ALLAH Swt provides guidance to seekers. Guidance is like a light in the dark as it arrives and lightens the wood past fajr.

There is always a reason, we, others living things, non-living things. We got sucks in problems and think that the bullshit is going on we got sucks in a silly situation. So you think you got lost or stuck but there is for the reasons. Everything is going according to the will of Allah. This whole universe time, leaf everything.