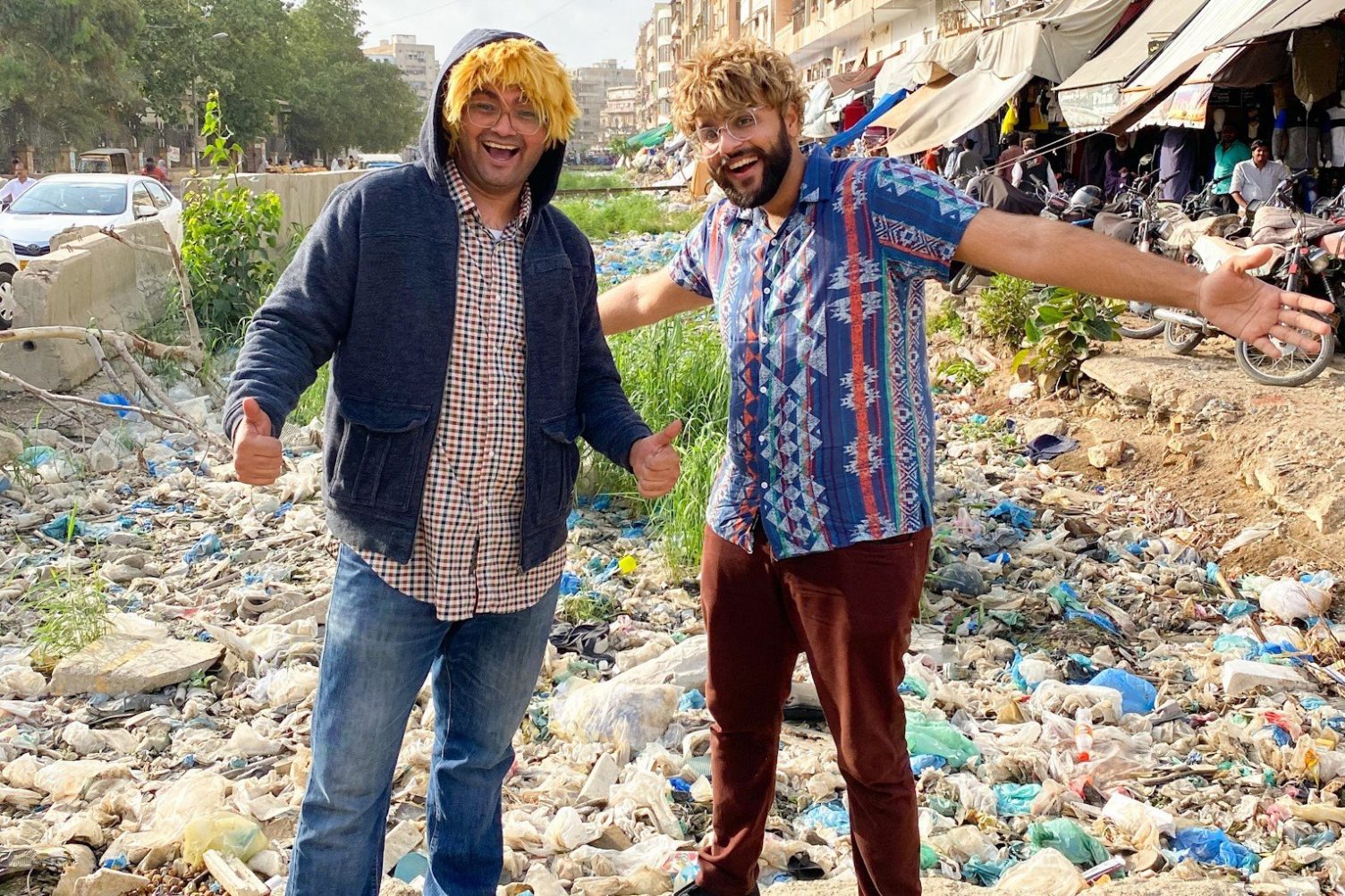 Bassam Shazli and Hassaan Bin Shaheen want to cure your colonial hangover. And they want to do it through comedy. The duo, which has been in a comedic partnership for over a decade. Has dipped into their arsenal of outrageous blonde wigs. And horrible American accents to address a rather pressing Pakistani issue: the white vlogger epidemic. From right-wing sweetheart Cynthia Ritchie to ‘positive image of Pakistan’-enthusiast Eva Zu Beck.

The country has seen a rise in the influx of white travel influencers, each new blue-eyed. And placed atop the social hierarchy by a deeply colonised population.

However, the comedic duo is coming for their crown. Complete with generic Western names and a generous dose of casual racism sprinkled in for believability. Bassam and Hassaan star as American tourists Adam and Steve in their comedy series Global Nomads.

The YouTube series, popularised through Instagram, follows the experiences of two ‘white’ vloggers exploring Karachi. From Rainbow Center to Sea View, the duo takes to the streets of the city in a quest for ‘adventure’. This comes in a variety of forms, which includes dining at Burns Road. Hunting for freebies and discounts in Zainab Market, trespassing into people’s houses. And walking along a polluted Clifton beach, labelling the stench the “stank of resilience”. Their ‘American-ness’ truly shines through.

Speaking to the Express Tribune about their motivations, Hassaan explained, “Recently there’s been a massive uptick in the number of white vloggers coming to Pakistan. But back when we first came up with the idea it was just Eva Zu Beck. We were super annoyed at why these white people get so much leverage from the Pakistani audience. They’ll post one video, and it’ll instantly go viral.”

On the quality of content being produced by the vloggers, the comedian continued. “They aren’t even the most amazing videos. There will be a generic shot of mountains with a voice-over about the beauty of Pakistan. Also, what they post really isn’t our lived experience. So, for us, it was basically just, ‘Let’s make fun of white people.’” Hassaan added further that the series draws from experiences both he and Bassam have had with white people in real life.

you’re talking absolute codshite based off the fact that your normie-ass black-and-white tick-box state school “education” poisoned and confused your mind so badly that you can’t even parse modern societal norms as simple as gender identity etc. i hope one day you learn to think. https://t.co/xn8Q079eNE

“Initially, we were being pretty idealistic and were trying to be very intelligent,” explained Bassam. When speaking about how they went from a studied. And scripted approach to one of improvisation and spontaneity. “We were trying too hard, hoping our videos got the traction that they need. But eventually, what we had to do was just put on some wigs. And act like a bunch of white people. That was the end of it,” he added.

Hassaan elaborated further, “What ended up happening with this topic was that we went into it equipped with nothing. But some outrageous wigs and because the topic in itself is interesting and we’ve experienced these white people taking up space, the themes cropped up themselves. The subtexts that come about are just byproducts, not anything that we have put a lot of conscious effort into.”

Falling for the act

Expecting that their brown skin and inaccurate accents would betray them. The comedians were shocked to discover that while most people understood the gimmick. For what it was, some actually fell for the act.

“They may not think that we’re white, but they do think we were foreigners who were visiting Pakistan just because of the way we were talking in English. Even though it was terrible English with a terrible accent,” shared Hassaan. “The most shocking and interesting part of our experience was when educated, university-going people would come up to us. And start talking to us in English, asking things like ‘what state are you from’ and ‘how are you liking it in Pakistan.”

This is the real problem mask anxiety: the realization that norms are liquid and that Nazi germany (choose your own worst fear) could trivially (or is already starting to) happen here, in my world, in reality, not just in old unreal history book and black and white pictures pic.twitter.com/eWosgx9UWr

One particular episode, where the duo explores Karachi’s DVD hub Rainbow Center. Saw the two being treated like actual foreigners, complete with VIP treatment. And a crowd of around 30 people. The comedians remained committed to the act, regardless of whether the camera was rolling or not. The duo revealed that they spoke exclusively in English to maintain the illusion, using their producer as an intermediary.

On the valourisation of the English language. Hassaan shared, “We have this ingrained bias in our heads. That just because someone is speaking in English or are foreign-looking. They need to be placed on a pedestal. For us, it’s really frustrating that English is considered such a benchmark of success. Why is it that if you speak fluent English. You are socially acceptable and all of your obnoxious behaviours are pardoned? It was interesting to play these caricatures and still have people take us seriously.”

For Bassam, colonial practices haven’t ended, but have instead simply changed forms. “Back in the time of peak colonisation, these white people used to take slaves to European countries to showcase them in zoos and exhibitions. Now, it feels like they’ve taken that exhibition to the digital realm, using their cameras to capture people,” he explained. The comedian added further, “All these white people are coming to ‘third world’ countries, recording the local population to showcase them back home as some sort of measure of their superior quality of life.”

Reflecting on the changing landscape of comedy, with social media tools like TikTok and YouTube at the public’s disposal, Bassam shared, “Entertainment of all kinds has been democratised. What you need to do is find a niche. It could be your socioeconomic class, your region, a certain language, whatever.” However, the comedian understands that the saturation of content online can become a disadvantage, but overall, he believes the change is for the best. “The youth does not have what it wants to see on national television, so it’s beneficial to have digital talent and a digital audience.”

On their future plans, Bassam explained that if all goes well, he’d like to be the showrunner of his own web series, and if everything fails, he’ll head Pemra. Hassaan, on the other hand, is excited for his music career, with an upcoming mockumentary on rappers in the works. Both hope to return with a second season of Global Nomads after having conquered the concrete jungle of Karachi and head forth, blonde wigs in tow, into the rest of the Pakistani wilderness.