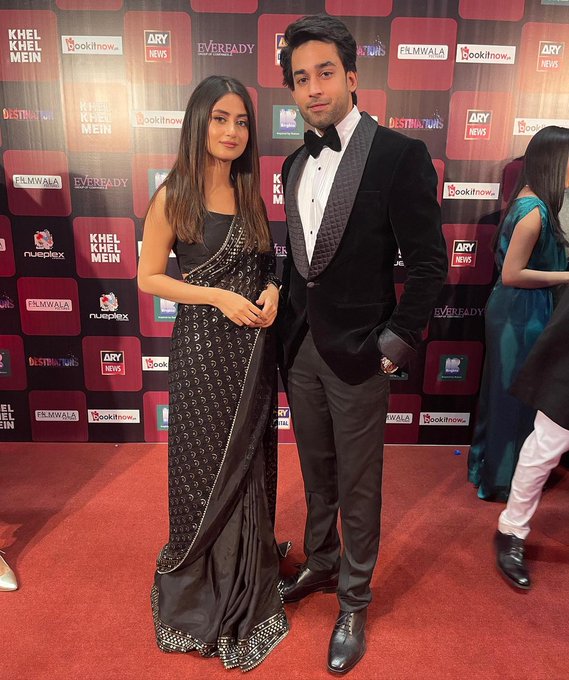 The amazing cast of Khel Khel Mein has already appeared on several shows to promote their film. With their outstanding appearances in the shows. They had always managed to make it a joyful show. Sajal Aly and Bilal Abbas Khan feature in the film. The incredible cast of KKM was recently seen on Fahad Mustafa’s quiz programme Jeeto Pakistan. Sajal Ali wore a black gown with stunning silverish embroidery that made her look ethereal.

Khel Khel Mein was the most anticipated film, and when it was released on November 19th. It blew everyone’s mind. People are praising Sajal Aly and Bilal Abbas Khan for their acting abilities. This fantastic film is directed by Nabeel Qureshi and is distributed by Filmwala Productions.

Dedicated to all KKM fans: "Aap ne hamara dil jeet liya!"
Thank you so much for the love 🙏❤️👏🏼 In just 2 days, the movie has made a whopping 1.1 crore! 🎬
.
.
.#KKM #KhelKhelMein #FilmwalaPictures #Filmwala #Arydigital #Arynews #Eveready #SajalAly pic.twitter.com/jFVvjl28me

Khel Khel Mein is now playing in theatres across the country. It has proven to be an incredible film that will go down in history as a classic. In the show Jeeto Pakistan. Sajal Aly and Bilal Abbas Khan recently wowed the audience. The first film to be released after the outbreak was Khel Khel Mein. We’re savouring every moment of it. People are praising the film’s patriotic tone. The film’s massive success is reflected in the critical acclaim it has received.

More fantastic material is desperately needed in our industry to help it return to its former glory. The pandemic has worsened the situation in every aspect of life. And our film business is no exception. If good films with powerful content were made. It would be a great way to increase the visibility of our theatres.