Home » Who is Mehwish Hayat, the Pakistani Actress Whose Independence Day Post Sparked a Controversy? 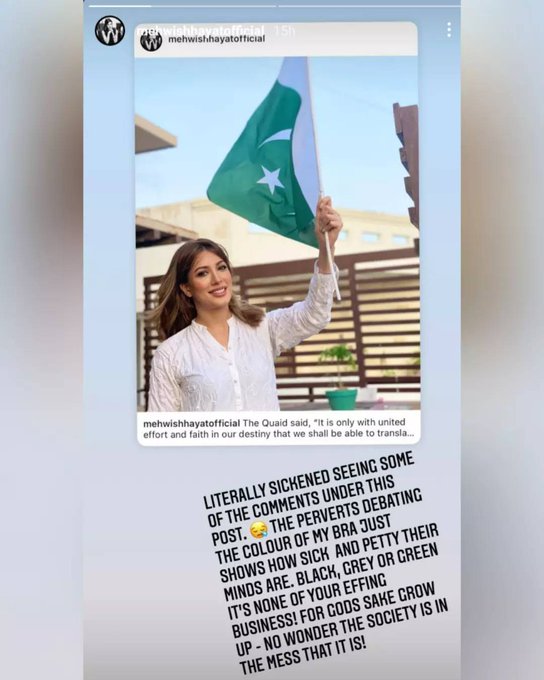 Who is Mehwish Hayat, the Pakistani Actress Whose Independence Day Post Sparked a Controversy?

Mehwish Hayat’s Independence Day post attracted a lot of trolling. As netizens commented on her innerwear with distasteful remarks. Who is Mehwish Hayat

Popular Pakistani film and television actress Mehwish Hayat had wished her fellow countrymen on Independence Day (August 14). And the post has now gone viral on social media for all the wrong reasons. Her post attracted a lot of trolling as netizens commented. On her innerwear with distasteful remarks. However, the actress later took to social media to word a befitting reply to the trolls. But who is Mehwish Hayat?

#MehwishHayat is upset after seeing comments of perverts on her independence day post where they were debating the color of her Br* . pic.twitter.com/FdbkYf2gNV

The actress started her acting career in Pakistan in 2009 with a film called Insha Allah. But her career really began with television in 2010. And she went on to become a household name after her role in the hit 2012 romantic serial Meray Qatil Meray Dildar. Hayat started acting in films again in 2014. And has since acted in a number of hit Pakistani films such as Actor in Law, Punjab Nahin Jaungi and Load Wedding. Popular for her roles and appearances in dance videos. The actress is presently one of the most successful actresses in Pakistan with two Lux Style Awards under her belt. In 2019, the actress was awarded the ‘Tamgha-i-Imtiaz’ – one of Pakistan’s greatest (fourth-highest) civilian honours. To commemorate her achievements and contribution to cinema.

Meet #MehwishHayat, the beautiful Pakistani actress whose bra sparked a 'debate' in Pakistanhttps://t.co/OVoRsT7oif

#MehwishHayat posted an Independence Day wish for her fellow countrymen but it attracted a lot of distasteful comments on her choice of clothing.https://t.co/1iZdGSnKtf

Despite her accolades in the film industry, Hayat is no stranger to trolling and controversy. Be it for her appearances in dance videos. Her stand for women’s rights or her recent winning of the ‘Tamgha-i-Imtiaz’ award. Hayat is always in the eye of a storm. On Pakistan’s Independence Day, the actress had shared a photo where she could be seen wearing a white kurta. However, some online trolls could notice nothing other than the colour of her ‘bra’ and took it upon themselves to harass the actor for something as trivial as this. Later, Hayat shared a screenshot of the comments and wrote. “The perverts debating the colour of my bra just shows how sick and petty their minds are. Black, grey or green it is none of your business. For Gods sake grow up.”