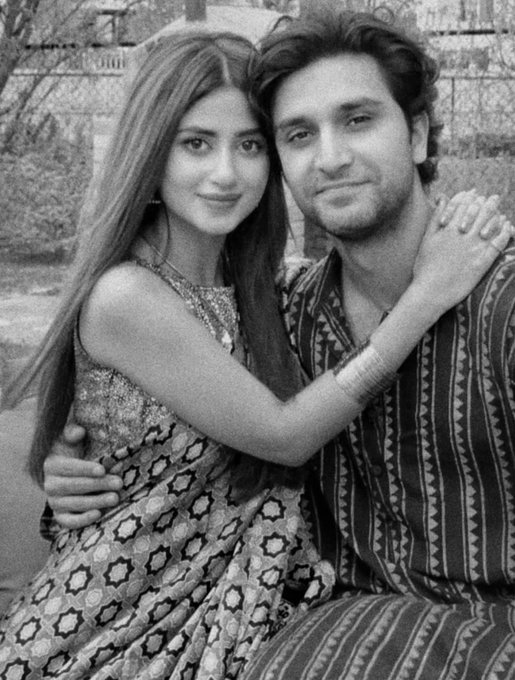 On social media, the affection between Sajal Aly. And Ahad Raza Mir’s family has been widely documented. They are always unified at any event or get-together. Mir’s family is now displaying a very different attitude. As a result of the recent situation. Khel Khel Mein, Sajal Aly’s most awaited film. Is presently in theatres and receiving a lot of praise and success.

#Sajalaly #Ahadrazamir I believe in your love and supremacy, I have faith in your relationship, lots of love to you, #Sahad.
Social media doesn't provide validation for a relationship. pic.twitter.com/s4mqhAaq4C

Whereas all of the industry’s big names were seen supporting the film. Ahad Raza Mir was noticeably missing. And did not accompany his wife at this momentous occasion. Any of Sajal Aly’s family members have not published any posts or celebratory messages on social media. The saas-bahu Jodi was primarily seen at several occasions before to this incident. And mama Mir was often seen cheering and supporting Sajal Aly.

The film was released on November 19th, and it has already won millions of hearts. Sajal Aly co-stars with Bilal Abbas Khan in the drama series O Rungreza. And their duo has received a lot of praise for their work. After a five-year hiatus, they collaborated again. Sajal Aly and Bilal Abbas Khan continued to work tirelessly on the film’s promotion. People adore seeing them on television. They have truly dominated the silver screen. And enthralled their audience with their incredible performances.

Used to receive several love gestures from her saasu maa in the past. However, given the hush surrounding Sajal Aly’s film. It’s possible that something isn’t right between the two. We adore them as a pair and wish them a lifetime of happiness together. Here are a few examples of screenshots; just look for the truth. Ahad Raza Mir and his family are not fans of Sajal’s latest posts.

#Sahad love for each other can be easily witnessed when they are candid, and that's the reason I love them. #sajalaly #AhadRazaMir pic.twitter.com/QSAJjHcwhm

I’m not sure why Ahad didn’t like Sajal Aly’s photo from a few weeks ago. Something isn’t quite right between them.

On the other hand, there was no mention of Sajal’s film. On her father-in-Instagram law’s account.