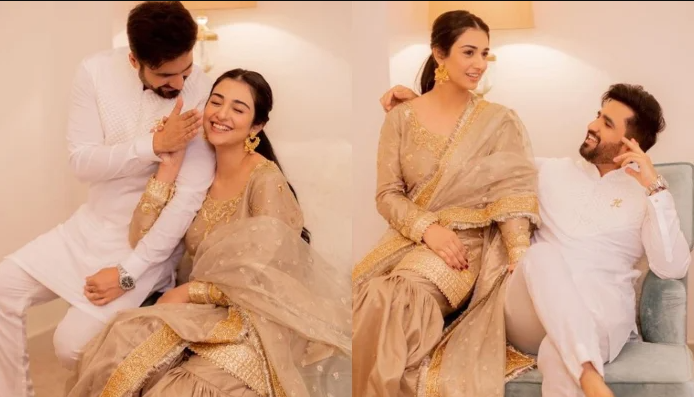 Due to their great chemistry and bonding both in front of the media and in real life, Sarah and Falak are a beloved couple among Pakistanis. Such instances that demonstrate their ethereal love and concern for one another are abundant on their social media accounts. Additionally, they open up to their audience about their private lives, particularly the joyful times they had with one another and their little child Alyana Falak Shabir.

The public has become more interested in the life of this vibrant couple since they appeared on television. They were wed in a fairy tale wedding ceremony. They maintain tabs on their most recent events, and Sarah slaps the trolls who harass her about various matters.

She claims that nothing she shares with her followers is intended to be taken as trolling, so please be considerate and let us to live our lives as we see fit.
When Falak was questioned about how he deals with Sarah’s temper, he responded that his wife is like a princess who never loses her composure. When asked how much money he makes each month, he responded in a funny way that it exceeds that of a doctor. Falak is a wealthy man, as evidenced by the fact that his expenses are less than his earnings. As we all know, doctors make too much money. Noor, Sarah’s sister, has yet to publicly announce her engagement, which is another detail that has been revealed about her.

On his social media,

Falak Shabir posted some questions and answers in which a lot of fresh information about this talented singer was revealed. He shared his most recent text from Sarah as well as the most recent picture of his daughter that he had taken using his phone. When asked about his acting debut, he added that his first play would include his wife because no one else would be given the chance.

What do you think—is this an effective strategy for celebrities to engage their audience? Please express your thoughts in the space provided below for comments. Thanks!