Home » Minal Khan was spotted in Islamabad with her husband, Ahsan Mohsin Ikram 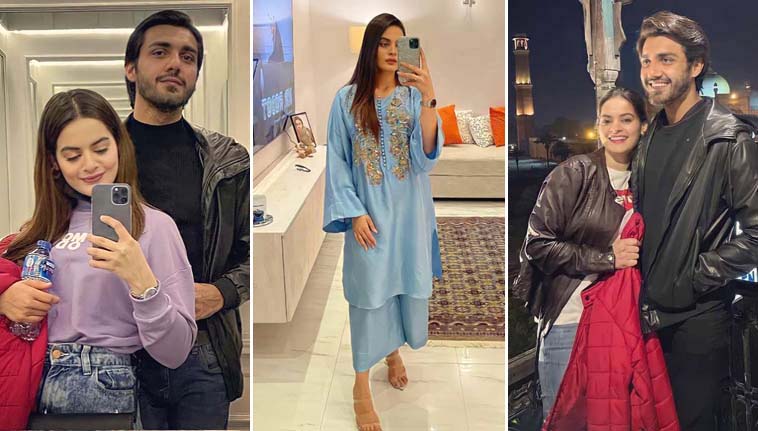 Minal Khan was spotted in Islamabad with her husband, Ahsan Mohsin Ikram

Minal Khan is well-known for her roles in Pakistani dramas. At an early age, she appeared in the drama serial Kash Main Tere Beti Na Hoti. Minal Khan is quite active on social media and enjoys sharing every detail of her life with her followers.

Following her wedding, Minal Khan gained a large number of Instagram followers. The most popular celebs are Minal and her sister Aiman. Minal Khan, one of the most well-known and accomplished actors. Recently married Ahsan Mohsin Ikram. Ahsan is also a performer. The couple was previously on their honeymoon, and they shared stunning photos with their admirers.

I hope all of you enjoyed our first appearance on tv together! 😀

Despite the fact that their honeymoon photos were cruelly mocked for various reasons. Maldives and Dubai were among their hey moon locations. Minal was mocked for her fashion sense. The couple is currently enjoying their time in Islamabad. Minal and Ahsan have shared photos from the event. They are enjoying their stay in Islamabad, and the frigid weather is ensuring that they make the most of it. Minal looks stunning in her basic yet stylish ensemble. They are undoubtedly a cute couple. We wish them nothing but happiness and success in the future.

How about you, gentlemen? Which of Minal Khan’s dramas do you prefer? Don’t forget to let us know what you think. Thanks!