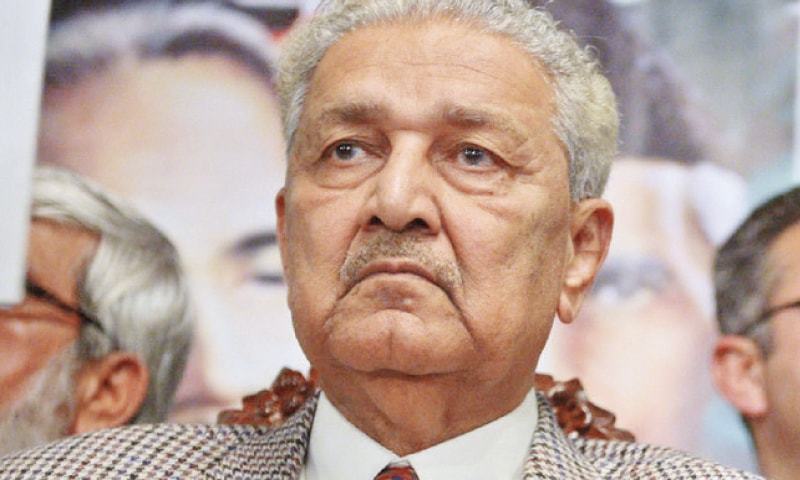 Dr AQ Khan is considered the father of Pakistan’s nuclear programme and is revered at home as a hero for building the Muslim world’s first atomic bomb.

Doctors tried their best to save the renowned scientist’s life but were unable to do so, resulting in his death at 7:04am. Doctors have said Dr Abdul Qadeer Khan passed away as his lungs collapsed.

The hospital administration is trying to make arrangements to shift Dr Abdul Qadeer Khan’s body to his E-7 residence. His funeral prayers will be offered at the Faisal Mosque in Islamabad at 3:30pm, said his family.

Speaking to Geo News, Interior Minister Sheikh Rasheed showered praise on the scientist, adding that all necessary arrangements were made to save Dr Qadeer’s life.

Rasheed confirmed that the government will accord a state funeral to the scientist in recognition of his services for Pakistan.

The interior minister said Dr Abdul Qadeer Khan had helped him a lot with educational activities, adding that he had remained a visionary leader in times when Pakistan was going through a sensitive period.

“He is indeed the Mohsin-e-Pakistan,” said Rasheed.

In response to a question, he said the funeral will be offered at the Shah Faisal Mosque, adding that the public will be allowed to partake.

“He was a great scientist. He served his country and served it with dignity and hard work,” the minister stressed. “The entire country respects him and he will be buried with honour today at 3:30pm.”

He informed media that the security has been alerted for the funeral.

Dr Abdul Qadeer Khan became a national hero overnight, not only in Pakistan but in the Islamic world as well, when in May 1998 Pakistan gave a befitting response to India by conducting its nuclear tests.

Following the tests, Pakistan became the sole nuclear power in the Muslim world and the seventh country to possess nuclear weapons. Pakistan’s nuclear weapons have kept Indian aggression in check.

Prime Minister Imran Khan praised Dr Abdul Qadeer Khan by saying that he was, for the people of Pakistan, “a national icon”.

“Deeply saddened by the passing of Dr A Q Khan. He was loved by our nation bec of his critical contribution in making us a nuclear weapon state. This has provided us security against an aggressive much larger nuclear neighbour. For the people of Pakistan he was a national icon,” he tweeted.

Federal Minister for Planning and Development Asad Umar prayed for Dr Abdul Qadeer Khan’s soul after hearing about his demise.

He paid tribute to the nuclear scientist by saying that he played a key role in making Pakistan invincible.

Defence Minister Pervez Khattak said he was deeply grieved over the news of Dr Abdul Qadeer Khan passing, adding that “Pakistan will forever honour his services to the nation”.

Education Minister Shafqat Mehmood heaped praise on the nuclear scientist, referring to him as the “pioneer of Pakistan’s nuclear program”.

“Sad to learn of Dr Abdul Qadeer Khan’s death. He was a pioneer of Pakistan’s nuclear program and contributed immensely to our security. May his soul RIP,” he tweeted.

Islamic scholar Maulana Tariq Jameel prayed for the soul of the deceased and appreciated his services for Pakistan.

“Dr Abdul Qadeer Khan was a precious asset for Pakistan,” he tweeted. “He played a key role in ensuring Pakistan became a nuclear power.”