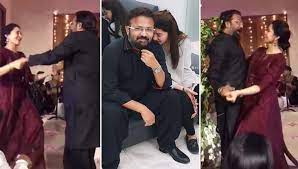 Shaista Lodhi is a well-known and well-liked morning show host who has also dabbled in acting. She has such a refined personality and a strong commitment to her profession. That she has risen to become one of the most well-known. And recognised people in the world. She has faced many problems throughout her Career. But she has always found a way to overcome them. She’s such a darling who has achieved enormous recognition. And acclaim as a result of her fantastic performances.

She recently began hosting Morning At Home, a morning show on PTV. She is doing a fantastic job hosting this event. Her appearance, demeanour, and, most importantly. Her commitment to her job make her the most well-known and established host. She went through a difficult time in her marriage and received harsh criticism from others.

Shaista’s dance moves with her hubby are absolutely fantastic. And her recent adorable video is making the rounds on social media. She hosted a Qawali night at her home. And she was seen dancing with her husband Adnan Lodhi throughout the occasion. Shaista just managed to sway with Adnan, who was clearly uncomfortable. This lovely pair is setting some serious relationship goals. Following her divorce from her first husband, Shaista Lodhi married Adnan Lodhi.

Shaista wore a lovely brown gown that she looked stunning in. Her outfit was simple but lovely. In this stunning collection, Shaista Lodhi is a sight to behold. She has kept herself in incredible shape and appears to be in her early thirties. She is truly deserving of greater attention and admiration.

So, what are your thoughts on this video? Please provide us your valuable input in the space below. Thanks!