Home » 5 Bizarre Death Rituals Around the World That’ll Make You Cringe So Bad! 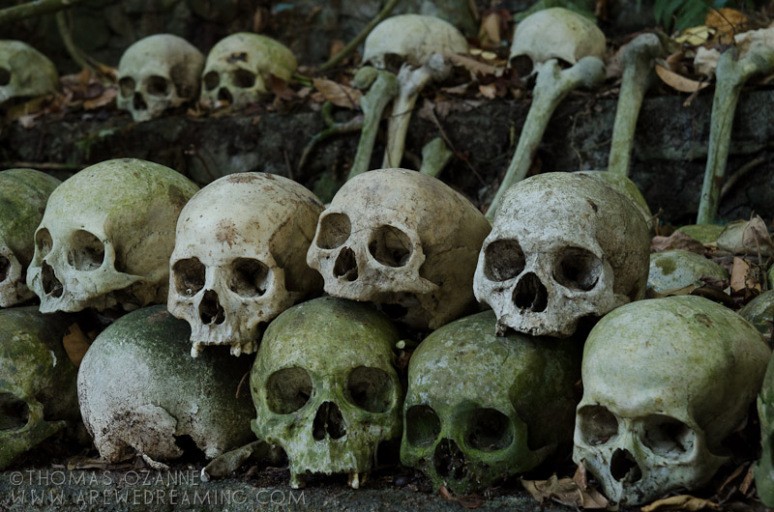 5 Bizarre Death Rituals Around the World That’ll Make You Cringe So Bad!

Mostly, we are just familiar with two very common rituals to farewell the deceased; either the burial is done, or the cadavers are cremated. But, little do we know that death is a matter of some baffling theories that vary from culture to culture, undisclosed by many. While these theories may not make any sense to you but the myths behind these rituals lead to some of the most bizarre practices around the world that occur to be a bolt from the blue for us all!

Here are some of the eeriest funeral rituals from around the world that’ll give you a turn!

A lot of cultures honor their dead by eating them. Yes, you heard it right! There’s a common practice observed around many ancient cultures where people cannibalize their deceased loved ones to honor them.

The idea of “Endocannibalism” is observed to establish a permanent connection of the living with their dead loved ones.

Oftentimes, the ritual is performed over the belief that in this manner, they can absorb the wisdom of their deceased loved ones.

Among many cultures, the Fore tribe in Papua New Guinea has been practicing the ritual for many generations. Other cultures include the Wari tribe, Yanomami tribes from Brazil, Amazon. Majorana people of South American indigenous tribes and Jenkins in Africa also tend to follow this custom.

This Indonesian ritual is observed among the Torajan tribe in the mountainous region and includes corpses of deceased loved ones to be kept at home even up to 50 years or more.

That means, that the deceased is treated like the living. Moreover, until the funeral which is usually 4 to 5 months away, the deceased is considered sick, and not dead. Besides, they are offered food, drinks, or even cigarettes every day.

Nevertheless, their funerals are rather joyous and celebratory and include animal sacrifices; usually a buffalo as it’s said to escort the deceased into nirvana.

One of the oddest things about the practice is that it doesn’t end here. The deceased, post-funeral is annually uncovered in August and is dressed newly to maintain relationships with the dead.

For the Torajans, the dead never leaves! Thus, they continue to live with the deads throughout.

This ritual is performed in Sichuan, where the bodies of the deceased are eaten up by vultures.

The sky burial is considered as an act of charity and sympathy and is believed to express their wishes to reach the heavens.

The method includes leaving the dead untouched for 3-days post-death, after which the body is cleansed and wrapped in a white cloth. Following morning the body is taken up the hill for sky burial whilst the priest chants prayers to escort the corpse to its destiny.

The corpse is later, chopped into several pieces, displayed, ready to be feast upon by the vultures.

The vultures, known as the Dakini, are considered angels who take up the dead ones to the heavens.

This indigenous group, who dwell in Manila, Philippines bury their dead in trees.

When a local is near to death, he selects a tree for himself in a forest. On his preferred selection, the kith and kins hollow out the trunk of the tree. And when the person passes off, he is entombed in the hollowed tree trunk in a vertical position. Prior to the death of the deceased, he even resides in a little hut which is built for him by his family at the base of the tree that he selected.

It is done so, as to accustom the belief that the dead must give his life back to the tree for its living as he is liable to do so just as the tree provides the tribe with food or wood for their living.

Prior to the death of the deceased, he even resides in a little hut which is built for him by his family at the base of the tree that he selected.

Although, this bizarre practice has been banned some years ago, but this is one the most mutilating death rituals in the history.

The women of the Dani tribe, Papua New Guinea, Indonesia used to have a finger cut of as the immediate family member passes away and their express their grief. This is done to satisfy the ghosts of the ancestors.

The ritual is accompanied by tribesmen staining their faces with dirt and ashes.

The amputated finger pieces were burned in the ashes of funeral fires, later to be kept at some holy place, whereas, the open sores are burned out to prevent bleeding which recovers with the passage of time.

While the ways through which people grieve, commemorate, or lay down the dead ones vary considerably from culture to culture, but some rituals really seem to take the exequies to the next level of macabre!